I have read a lot of stuff on movement screens recently and specific "functional tests" such as overhead squats and single leg squats. People both extolling their virtues and others maybe less sure about their validity.

I thought I might chime in with my thoughts on these "screens".  Firstly part of the problem is we are trying to shoe horn function into a handful of assessments. Given the incalculable number of functions this is a pretty tall order. Another problem is that we are trying to 'define' Peoples function. This has always been the problem with 'functional' training, trainers tend to define the clients function rather than the other way round. A more successful approach, although less easy, is to have a thought process that allows us to understand the biomechanics behind someones function and be able to design a test to tell us how well someone interacts with their functional activity. At Cor-kinetic this forms a cornerstone or principle of how we approach the body and teach people to approach the body.

So are you testing the test? Or are you testing someones functional needs? That is a question you have to ask yourself! If the test has nothing to do with the needs of the client or player then what validity does the answer have? We are simply testing a test.

All movement is a specific skill. Many sporting movements are very specific skills honed over a number of years. Is a poor test on a movement we have not practiced just poor skill at the movement as we have spent no time refining it? Are the improvements in the movement skill based? If so then would it not be better to spend the time practicing a skill that we really need for our sport? These are all questions we need to ask.

As movement patterns live in the brain and we have between 100-120 billion neurons each with around 10,000 connections each I am pretty sure we have the neural real estate to hold more than a handful of movements that define how we function.

Does a tennis look like rugby? If not then we need to find a way to screen them specifically.

The single leg squat test does go a little way to incorporating a functional thought process. The fact that a person during gait spends between 50-85% on a single leg depending who you listen too has a sprinkling of specificity. I think more towards the first figure for walking and more towards the second figure for running! However the amount we squat during walking gait would be minimal. 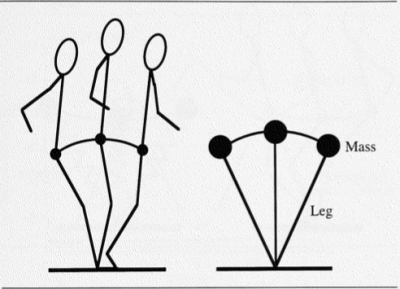 This is the inverse pendulum model of human walking gait, this means we are able to be efficient and use gravity to transfer our COM (centre of mass). This is in opposition to the spring mass model of running. The aim of walking gait is to not overly squat and lower our COM. (Farley 1998) 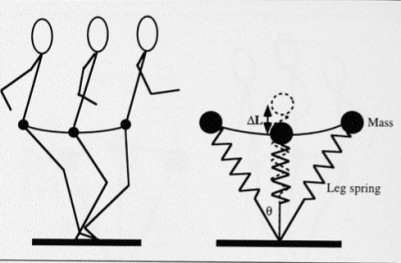 So a single leg squat maybe more 'functional' for running but not walking gait. Although the depth of the squat may still not be large. We can see the variation in function here and a single test to define our 'functionality' may be of limited value. A much more valid process may be to understand the variation in function of the client stood before me.

The major factor in both functions (walking and running) is being able to effectively move our COM. The ability to translate as well as rotate is a massive component of human movement. Nearly all 'functional' tests seem to assess our ability to move in the vertical component of the sagittal plane rather than the horizontal which is at least as important if we ever want to get any where. The art of transferring and controlling our COM dynamically should be a principle part of any 'functional' testing screen or protocol.

This is something that the S/L squat does not tell us but is one of the most important 'functional' tests we can have. Also would a more effective adaptation to a S/L test to find out how our pelvis is able to rotate over our femur creating relative IR at the hip whilst in a S/L stance?? This would be more 'functional' for both walking and running. The stability we crave in a S/L stance maybe generated through eccentric tension of the numerous external rotators and adductors (many of which are lengthen in IR)! Without the pelvic rotation this stability could be compromised, so testing stability without pelvic rotation on a S/L for gait maybe a bit like a driving test with 3 wheels!!! Function is specific and if we want to be 'functional' we must learn to be more specific also.

An overhead squat test is another 'functional' test and very rarely in functional activity do we do things bilaterally or over head for that matter! 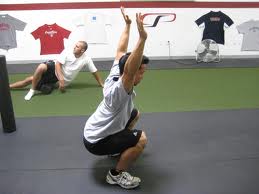 If we go back to the pretty universal function of gait, we can see that the two arms are doing different things. One is flexing, one extending. One externally rotating, one internally. This means that the scapulae will also be doing different things. elevating and depressing, retracting and protracting. In fact any function which involves rotation (pretty much all of them!) this will be occurring at the glenohumeral and scapulothoracic joints. Can a test that fails to take any of this into account be reliable for predicting any movement pattern dysfunction in the body away from a single plane overhead squat?? In everyday function we rarely squat from a contrived position defined by someone else. Squat down to do the gardening or get something from the fridge I guarantee it will not be in the pelvic neutral, toe out and linear fashion we do in the gym. To assess and train like this and define it as 'functional' may not be accurate in both thought process and application. The variation in foot position, and therefore hip position, in all three planes in functional squatting is huge. Dysfunction or pain could be occur away from this one contrived position and a thought process that allows us to test a wider variety of positions in a movement may give us more information.

Lastly muscular range in one plane of motion may be naturally mitigated when three-dimensional tensile or compressive force is acting on the fibres. Simply a structure may not be able gain as much length in one plane when also being pulled in another direction or plane. So a test that only tests a single plane at a time may also give information not consistent with three-dimensional functional muscle movement. This is similar to single plane force production (isolated) not being applicable in a three dimension environment where force has to balance across three planes.

As always this is my opinion on a complicated subject that has no definitive answer, only more questions!!!

ITB Pain
Power of the capsule!
Knee pain-Patellofemoral. A functional approach.
Its all about practice!!
Does charging more make you better!!??
Muscle firing. What does it mean?

StrengthMuscle firing. What does it mean?
Scroll to top