Blog
You are here: Home1 / Blog2 / Uncategorized3 / Are you all about the exercise or the person doing it? Making movement... 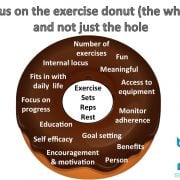 This is the first in the series of a few mini/micro blogs of about 500 words (famous last words) and in this first one I wanted to kick off by talking about making movement and exercise meaningful.

This is a term that is being banded about more and more in rehab but still has the feel of a buzzword rather than something well defined.

Firstly lets separate the idea of meaningful from what many describe as ‘functional’. Meaningful exercise does not have to look or recreate movements, mechanics or even physical qualities that people may need.

Lets PLEASE not go down that road again. PLEASE.

Something being meaningful is much more about the WHY behind doing it or the meaning it holds (as the title suggests : )

Too often it’s the therapists why, but it really should be the PERSON doing it’s WHY! As therapists we often have a bunch of why’s, ROM, strength and other outcome measures that are often not really very well aligned with the patients WHY.

Put yourself in the other person’s boots - why am I actually doing this? And ultimately, by doing it, how can it help me? We pretty much do this calculation for a lot of things in life.

What makes this person tick when it comes to moving…..

Now it could be argued getting out of pain should be a big enough WHY. But when it comes to exercise, especially for rehab, we know that is not enough from the data around adherence (commitment is a much better word btw) and this also extends to adherence to drugs and general health advice.

So really we have to consider HOW to get to peoples WHY. Well I think this really has to come from HOW we as HCPs interact with our patients. Without knowing what they want to achieve or their valued activities it is very hard to create a real relevance, MEANING, or as I like to call it a ‘finding a HOOK’.

Essentially any movement could be framed as being meaningful with the right explanation and the link to a motivating and meaningful goal. Learning more about sets and reps might not improve your outcomes!
Recent research has shown some very good effect sizes for using goal-setting interventions in back pain *HERE*

Here is real life an example from a course I gave last weekend in Melbourne. An attendee was discussing Jiu Jitsu training. He said 50% of the reason he goes is for the social aspect. Firstly imagine the impact firstly of NOT going on life (more than just pain!), secondly the motivation to get BACK to going.

Rehab should tap into the meaning to that person’s life and what they gain from doing it, not just doing an exercise because someone told me too.

The problem has been one of therapeutic exercise about finding an exercise to fix the problem, such as VMO firing for knee pain or core firing for back pain. Potentially we could call this targeting the muscle but missing the person.  So we are now talking about movements not muscles, but how about talking people? Getting people moving perhaps needs a GOAL, a HOOK, a MEANING?

Maybe one of the benefits of working with a sporting or active population is that the WHY is often clear-cut, sometimes people can even be over motivated.  The meaning is built in to the process.

The challenge with persisting pain maybe the motivation is not so clear cut, we need to dig a bit deeper as pain can narrowed peoples focus and reduced the amount of options they feel they have available to lead a full life.  This is where ‘finding a hook’ can be really important I feel.

Painful exercise in rehab – Yes, no or a lot to think about?