Blog
You are here: Home1 / Blog2 / Uncategorized3 / Back pain during running. Have you looked at your big toe?

Now this post equally could have been hip pain, knee pain or foot pain when running. The available motion in the big toe or hallux will affect the operation of all of these body structures during integrated movement.

With the foot day of the current Cor-Kinetic Mentorship program coming up this weekend I though I would write a quick hitter that is not to technical on checking the big toe to help with pain and performance during running and what to do about it.
I read a lot about improving extension of the hip and stretching the psoas/hip flexors etc but not a lot about the foots effect on hip extension and the hip flexors. In an integrated kinetic chain such as gait, the foots ability to successfully go through its ROM (range of motion) will directly affect the hips ability to go through its ROM. Most of the stretching of the hip into extension we see however seems to isolate the hip from the foot through kneeling. Whilst this can be used to affect structures such as the capsule we also need to integrate into the whole chain to create movement pattern data within the neurological system and also to find out if the foot is having a negative impact on the hip when in an integrated situation.

When we get movement at the hip in very simple terms this tends to take the movement
demand away from the lumbar spine, especially in the transverse plane. The sagittal plane and transverse plane are very closely linked at the hip. The further the hip extends the more the pelvis rotates to the same side. Try it out! The further you step the more the pelvis rotates. Step forward and back and watch your pelvis from the top down. This means we create more internal rotation as the proximal pelvis rotates over the distal and fixed to the ground femur (by way of the foot). The more extension and rotation we get at the hip the less has to be generated at the lumbar region for the healthy operation of the structures upstairs. Also the more force that is attenuated through muscular movement at the hip the less gets transferred to the lumbar structures. So hip extension and hip movement in general is vital to the health of the lower back, but you knew that already!
So whats the foot role in hip extension? Well to get good extension the pelvis has to travel or translate anterior or forward away from the femur. Our centre of mass (pelvis) is traveling over the fixed foot stretching the hip flexor which then concentrically explodes into flexion and swings the leg to begin the gait cycle anew. Without this explode our transfer of mass would be poor, running is essentially controlled transfer of our COM!

This is easy if the femur is fixed to the floor by the way of the tibia and the foot. To do this we must have adequate hallux dorsi flexion. If this dorsi flexion does not exist the foot will have to find a compensatory movement that will affect the femur and its position in relation to the pelvis and resultant hip extension.

A common compensation for a lack of hallux dorsi flexion is for the foot to abduct and push-off the medial side of the hallux in a kind of spinning motion. This is called a medial heel whip as the proximal part of the foot (the heel) is moving towards the mid line. If you were to check the callous pattern on a foot like this you would see a callous on the inside top of the hallux near the nail. This is called a pinch callous. We also get a heel whip from a foot that lacks dorsi flexion and uses the abduction component of pronation to get dorsi flexion. Again this can lead to less dorsi flexion at the hallux. 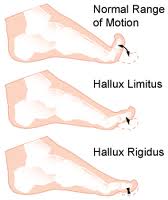 This rotation will also impact on the rotation of the femur and pelvis and create an increased rotational force on the pelvis and associated structures. If this force is not attenuated by movement at the hip-joint in the transverse plane then this will be transferred to the lumbar spine increasing compressive forces at the facet and SI joints. The amount of motion available to decrease force, through muscular movement, on the structure is limited to 5 degrees across the whole lumbar spine. When we look at the range in transverse plane in the ball and socket joint of the hip we can understand the need for the hip to do the work. In this case though it is not the hips fault but the hallux! If you were to watch the gait pattern described you would see the foot turn outwards and butt "fly back" early on the affected side because of increased transverse plane motion.

The dorsi flexion of the hallux also contributes to the windlass mechanism that creates a rigid and stable foot to allow effective hip extension and propulsion. In this way a limited swing phase caused by lack of Hallux dorsi flexion could even affect motions driven top down on the opposite hip during the gait cycle. Without hallux dorsi flexion the plantar fascia is unable to shorten and resist the peak moment of force that the body's mass exerts on it during single leg stance phase during gait. This would mean the plantar fascia goes through excessive tensile (lengthening) force and duration which can cause abnormal bone growth and pain. 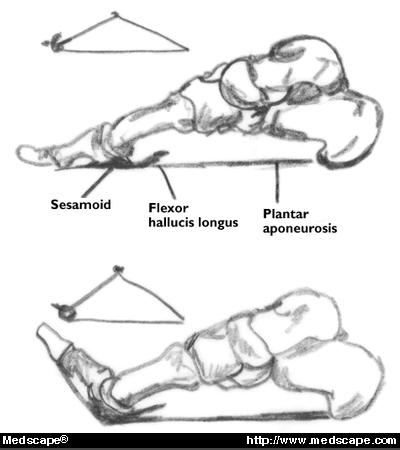 What to do??
Simply check the available dorsi flexion at the hallux. 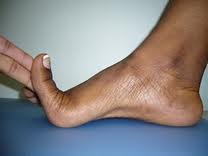 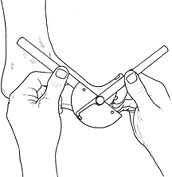 This can be done hands on qualitatively or also quantitatively by using a goniometer.
If you feel that it is limited then you could first try to create some motion off weight-bearing hands on. I like to do this by pushing the hallux up while creating some plantar flexion of the first metatarsal at the same time by pushing down on it. You can also push it slightly back to create some joint gaping.

One method I use is the "Big toe matrix" I learned from the great Gary Gray. You have to put the big toe on the ground and dorsi flexed in a stride stance position then drive the knee in all three planes. This will in turn create motion at the big toe driven top down as in gait!

Next stage is to integrate the foot into some hip flexor stretching. This means that we have to come away from a kneeling position and make sure that the heel is off the floor and you are transferring your mass forward over the big toe whilst the hip is going through extension. Make sure you are looking for compensations or reduced movement from the hip, foot or both!

Just some quick and simple techniques we use at Cor-Kinetic to keep people pain-free and performing!

Fascia
Optimal range. More may not be better!
It's all about assessment….
Golf: Hip Overpronation!
The Hamstrings!
Using your mass!!!

What does the word functional mean and does it matter??
Scroll to top