Blog
You are here: Home1 / Blog2 / Uncategorized3 / Are the days of assessing movement OVER?

In all honesty in its current format the answer here has to be an unreserved YES, we should STOP assessing movement.

This opinion is based on the two predominant concepts we appear to have currently when assessing movement.

Firstly the concept that a deviation from a movement or muscle firing ‘ideal’ is the cause of someone’s pain such as seen with the pathokinesiology model.

Secondly that we can also ‘screen’ movement to identify faulty movement that might lead to injury, this is FAR too big a subject to get into but it seems we weekly have new data suggesting screening does not fulfil the role it was designed for.

Both of these concepts have so far proved to be elusive in providing concrete evidence that they do exactly what they say they do.

A modern understanding of all the contributors to pain means the likelihood of pain being consistently caused by one single factor across ALL people is pretty absurd really.

The more we study movement the more we find that it is in essence highly variable. This variability is not only between people but even the same person seems to move differently when they repeat a movement. It has been suggested, and with a fair amount of evidence, that healthy movement is variable and losing variability maybe a problem within itself. It is important to realise this about movement because it allows us to appraise the idea of movement assessment more critically.

I have previously discussed this *Here* and *Here* along with the concept of corrective exercise.

Now this means that being able to identify a ‘faulty’ movement pattern will be highly likely if you are measuring it against a singular ‘ideal’ version. The problem is the singular ideal version does not really exist and also does not seem to be linked to very much, rendering the whole process a bit of a waste of time. 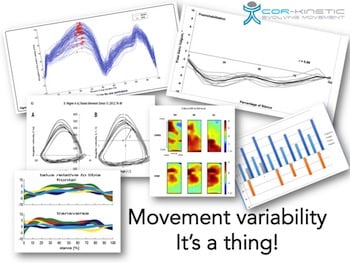 It makes little sense not to be variable:

We also may go further down the rabbit hole in that some now ASSUME that pain is simply the RESULT of a faulty movement pattern without any kind of critical analysis at all. Think how some people approach back pain, "Its your TvA not be firing" rather than lets find out if it is or not (obviously no clinical test tells us this, just an example).

Movement does not equal force

Now I am no biomechanist but we also must realise that just because a movement goes into a potentially ‘faulty’ position does not tell us the whole picture of how much damage that poses to a tissue. Sure it might increase the risk in some contexts but alone it does not give you the ACTUAL force applied and we would also need to know the acceleration as well. A fast movement within proposed ‘safe’ parameters that generates a large force (F=MA) could provide a much greater load to a tissue than one that was proposed as ‘faulty’ that moved much slower.

In fact under greater loads our movement seems to change, so assessing in a low load environment may not give you an indication of how movement is in another situation. This was an interesting piece from Frost et al *Here* showing exactly that!

Some seem to have developed the idea that if you get a movement right you can put it under ANY load. The way the body manages loads internally through the way it moves may be far LESS important the overall volume of load that the body may go through overall and this could be in volume, frequency or intensity.

So can we STILL look at movement in practice, I believe so. Everything has it uses and limitations and its working out WHEN thats the tough bit.

Pain DOES have an effect on the way we move, this is pretty well researched showing alterations in what happens with both kinematics AND kinetics at a joint, to adjacent joints and right up to avoiding movement completely for fear of pain. This is a great paper by Hodges & Smeets discussing this *HERE*

Certainly it very difficult to suggest that the way someone moves is a cause of their problems. Do you know what it looked like before? Could it be the RESULT not the cause or pain? BUT is there also a possibility that a change in movement strategy COULD also have an effect on reoccurrence or another injury. We know that the best predictor of future injury is previous injury *Here* and this could be a factor. This has also been mooted with back pain *Here*.

It is a good place to use your reasoning skills. Is this the first time it has happened? Is it acute? Both of these simple questions might help to determine if it is currently an adaptive strategy (helpful) because of pain or is it a maladaptive behaviour (unhelpful) that maybe contributing to the maintenance or reoccurrence of a problem.

Look at the INDIVIDUAL

A potentially more individualised concept for how we view movement is that rather than a binary right and wrong view that we have currently, we could say your current strategy is unhelpful and swapping that for another might be more helpful, there are often a whole bunch of other ways that could be beneficial rather than the 'right' way.

This might only be for the short term, such as a symptom modification, or for the longer term if you believe a movement behaviour maybe coupled with a pain response.

Gait re-eduction for runners seems to follow this rationale, see whats going on, does that potentially relate to the issue and can we subtly alter it.

Now there maybe certain scenarios that do carry more risk such as loaded lumbar flexion or extreme knee valgus but they seem to be pretty load related. Unless someone is regularly under these loads perhaps it matters less. But ask yourself how many people in the gym have popped an ACL doing a single leg squat? Perhaps the caution can cause more problems than it solves here? Especially with the unhelpful beliefs people seem to be prone to forming.

Some examples of unhelpful

If some one has a very hip driven strategy whilst currently suffering from a proximal hamstring tendinopathy altering this could reduce further load/compression to the tendon to allow it to desensitise.

It could be that be that someone is bracing BEFORE they move and this is an unhelpful component. This maybe seen with lower back pain sufferers.

Before bending over to do their shoelaces someone specifically braces and this has become coupled with the pain they are experiencing. Attempting to change this part of the motor strategy MAY affect the outcome.

It could be they only have ONE movement strategy

We see decreased variation linked with chronic pain at a number of areas of the body. This could cause repetitive loading or consistent patterns ASSOCIATED with pain.

A specific task maybe is performed in a repetitive way. This might be the way someone lifts, reaches or even runs. A way to assess this could be to provide variable challenges and see how well someone can adapt.

What we do have to remember that this is all TRIAL & ERROR.

It may or MAY NOT have an effect and essentially this is everything we do. We should try to be informed by current best evidence but also  remember is just a probability generated in a controlled environment and may not directly translate to this person you are dealing with.

What makes a GREAT rehab program?

Listening IS THERAPY!
Scroll to top