Blog
You are here: Home1 / Blog2 / Uncategorized3 / Simple side of biomechanics!

One of the key things to understanding how to view the body functionally specific is the biomechanics behind how we move.

A (simplified) understanding of biomechanics allows us to break down different functions to create authentic movement based techniques that create the right joint reactions for when we are training or treating our clients. After teaching a mentorship group last weekend some of Cor-Kinetic’s principles of biomechanics I thought I would write this blog post to help explain our process that has also been influenced by the teachings of the Gray institute.

Now the word biomechanics sounds a bit scary. If you have ever opened up a biomechanics book or journal then you will probably have had a similar reaction to me, which is one of amazement at the equations and symbols on offer!

(Apparently the biomechanics behind swimming!)

Instead in the process we use at Cor-Kinetic we are looking more at the movement of bones both in real space and in relation to each other. This relative movement of the bones creates specific joint reactions that in turn will have an affect on the attached muscles for an authentic reaction in the neuromuscularskeletal system as a whole. 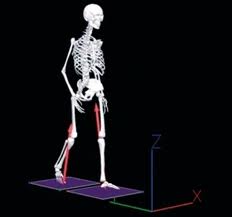 The real key is in understanding that the real bone motion and relative joint motion can be different. So in essence we could have two bones both externally rotating in real space but the relative motion between the bones at the joint could be internal rotation.  This hinges on the difference in speed between the two bones. Lets outline some of the key points below.

In the appendicular skeleton (extremities) the motion the DISTAL end of the DISTAL bone is going through RELATIVE to the PROXIMAL end determines joint motion. This means if the proximal end is moving towards the centre line in the frontal plane for example then the distal end will be moving away or abducting! 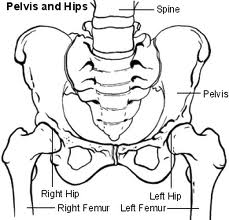 The motion of the pelvis is also determined from a different point. Rather than the distal end (because both are!) we look at the relative movement between the ASIS and PSIS.  Anterior rotation would be the counter-clockwise rotation of the ASIS so the PSIS would be superior to the ASIS.

The same counter-clockwise rotation as we see from the tibia would be described as posterior rotation because the distal end has rotated towards the posterior.  This can sometimes be confusing because both the tibia and pelvis bones are going through the same rotation but one is described as anterior and the other posterior!

The relative speed of the two joints is also critical to determining the relative joint motion.

It is important to now know which bone is moving faster as this will help to determine the relative joint motion. The general rule is that the closer the bone to the driver of motion the faster it will be going. This is because of the dissipation of force.  As an example, a foot driven motion will generally mean the distal bone of the lower limb will be moving faster. So at the knee the tibia will be driving faster than the femur. If we were to hit a tennis shot however the proximal femur would be closer to the driver of the hand meaning it will be moving faster. At the elbow however the distal radius would be closer to the hand meaning it would be driving faster than the more proximal humorous. So we need to know the driver and which of the bones that comprise the joint we are looking at is closer to the driver.

This is all very easy when the distal bone is moving faster as the real bone motion and relative joint motion will be the same. The confusion comes in when the proximal bone is driving faster than the distal in the same direction. In this case the relative joint motion will be the opposite to that of the proximal bone. An example in the transverse plane would be at the hip in the back leg of gait. Both the real bone motion of pelvis and femur is rotating in the same direction, externally. However because the proximal is rotating faster the relative joint motion is internal rotation.  The easiest way I find is to put my fists on top of each other. I then rotate the proximal bone in the direction it is rotating, in this case external. I then rotate the bottom hand in the opposite (what determines the joint motion) and this is internal! The transverse plane can be easier to understand sometimes because the whole bone will be rotating in the same direction rather than the proximal end one way and the distal end the other!

One movement that can sometimes be confusing is abduction of the knee. This is because the largest motion is from the proximal end going towards the mid-line, rotating around the axis that runs posterior to anterior. But if we follow the rule of naming the joint motion from what the distal end of the distal bone is doing relative to the proximal end, then it is moving away from the centre line of the body or abducting!  Easy when you know the rules!! 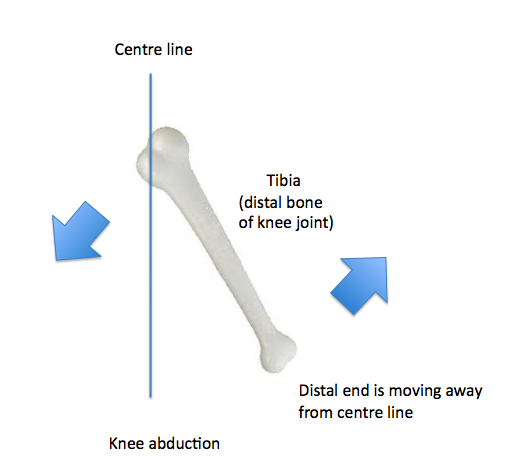 Check out www.cor-kinetic.com for more information on our courses.

As always this is an example of our thought process rather than a defined way that things have to be done in an academic sense! We hope it helps!

Knee pain-Patellofemoral. A functional approach.
It's all about assessment….
Barefoot training/running not for all!!
Optimal range. More may not be better!
Using your mass!!!
Hypermobility!

What are we training for??Power of the capsule!
Scroll to top