So I have not blogged for a while. It feels like I have been here, there and everywhere teaching in November. From New York to the Manz fitness conference in Portugal and more locally in the UK.

In this blog I want to look at a more functional approach to the concept of strength or maybe more importantly force production during function. One way of defining strength, as always there will be different definitions, would be the ability to move an external resistance or generate force to overcome a load (and its inertia if we are being consistent with Newton) . Generally in the gym this would be a weight. 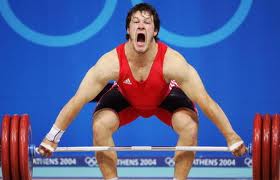 Now with a weight it is very easy to quantify the fact we are moving a larger external resistance or mass. In fact it usually says it on the side in a numerical form. The question we have to ask is does this make us better at force production within our function (if that is what we want of course)??

Lets go back to our good friend Newton. His second law of acceleration defines force production or F=MA. This is force = Mass and Acceleration. This equation tells us that force can be produced in two distinct ways, M over A or A over M. As we tend not to walk around with Newton meters to measure force it is much easier to just quantify the mass element of this equation. So we look at M (mass) over A (acceleration) as a simple way of measuring our ability to produce force. The question is are most sports high external resistance and therefore M over A or lower external resistance and more A over M. This is a harder question to determine but if we look at a couple of sports this might give us an answer. Sports such as tennis and football (soccer) would have a lower external resistance and rely much more on changes in velocity to generate force or A over M. This would also be true of throwing a punch or ball. In these circumstances would ability to move large masses help us??

If we look at the Hill curve (1953), which is the hyperbolic force-velocity curve, this implies that velocity of muscular contraction is inversely proportionate to load. We can see that large muscular force cannot be exerted in rapid movements, as we would see in weight lifting, that would be associated with changes in velocity or A over M to generate force . 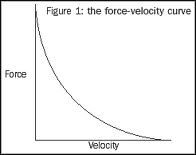 So do we need to be strong to be good at our sport?? One perspective is that the greater someones strength (M over A) or hypertrophy and physique the better. Although I think this is often not the case in the sporting arena as we see amazing performances by people on a regular basis who do not fit this bill. It maybe that within a more functional context a sub classification of speed strength maybe more applicable. We would define this as the ability to execute a movement against a small resistance with a high velocity.

Speed and intensity of movement will recruit the fast twitch muscle fibres associated with maximal effort. These fibres are recruited as per force needed. As previously highlighted this force can increase A over M as much as M over A! So do we need to be specific in the way we recruit these FT fibres if we can recruit them also M over A? Moffroid & Whipple (1970) found that there was little transfer effect from low velocity training to high velocity training, couple this with the Hill curve data that force decreases with the velocity of contraction, it would appear that specificity plays a role in increasing applicable force.

So we need to specific in the way we produce force. So then what about the position this force is produced from in terms of movement or motor pattern? By using set classic gym based strength exercises for strength in a wide variety of sports, this would indicate strength is perceived as generic in terms of position rather than specific. However research does not support this assumption. Verkhoshansky (1968) sees the kinesiological pattern as important in special strength training and the patterns of force production depending on a specific neuromuscular process. Sale and MacDougall (1981) also see "Increased performance is primarily a result of neuromuscular skill". They also comment "increased strength is apparent only when measured against the same types of movements used in training". This all seems to point to the fact that specific function related movement patterns and their mastery is important in increasing our force production and performance. Bompa (2000) says “Strength adaptations are angle specific and thus all possible angles must be utilized". Lifters have known this for a long time as they often change angles through inclines and declines, however they rarely use planes other than the sagittal. Different angles, as well as interactions with different planes of movement, occur in different functions and sports. This means that function related angles, planes and movement patterns could be important in increasing force production and strength in a classic sense if required.

We also cannot replicate maximal forces produced in a single plane of movement during non function related fixed positions when in dynamic upright function.  Force would have to balanced across all 3 planes of motion (as function is three dimensional) and also relate to three dimensional external forces acting on the body. This would also diminish applicability of non specific strength training to functional performance.

The body has found a unique way of controlling and harnessing external force for force production and energy and information efficiency. This would be the load to explode of eccentric before concentric muscular actions involved in the stretch shorten cycle. The vast majority of functions use this process from hitting or throwing a ball to standing up from a chair (we flex forward before extending). This action of creating tensile force on the muscle elicits the myotatic reflex for neurological muscular activation vital in functional force production and also storage and recoil of kinetic energy from the more passive myofascial structures such as tendons. We know that energy conservation is vital to prolonged force production involved in sporting endurance. As energy decreases so does skill and likely hood of injury.

As always this is purely my personal opinion on the concept of strength. It is a different view from the traditional paradigm and may not be shared by strength purists. However differing opinions are vital to understanding the complexities of the human body we all love and cherish!

Muscle firing. What does it mean?

Biomechanics BS. Can you 'predict' injury or pain?

The brain, movement and pain! Part one.