Tag Archive for: biomechanics of running

You are here: Home1 / Blog2 / biomechanics of running

The perspective that the body is an interconnected unit that displays regional interdependence is a valuable one. That different parts interact in different ways during different activities and influence ROM (range of movement) in other areas of the movement chain should seem a fairly easy link to make when looking at the whole body during different context dependent movements. We often eschew the value of the integrated system in favour of the isolated joint/muscle model.
END_OF_DOCUMENT_TOKEN_TO_BE_REPLACED

A term I tend to hear quite a lot in the gym is 'muscle firing'. A classic example of this is "I have been told my glute's don't fire." I must admit I am a little confused by this term.

As far as I can tell this term means muscle activation and this is where I start to get even more confused. This activation usually refers to a muscle shortening (concentric) and producing force. What we have to ask ourselves is, is this how muscles work?

In these situations I always like to refer back to my principles of muscle function. In this case specifically the principle of muscles lengthening before they shorten. This eccentric lengthening is the activation or trigger for the concentric force production.

This is a pretty solid principle. Go to throw a ball and first you rotate the opposite direction. Go to jump and first we go down. Even standing from a seat we flex forward before we extend. So if my muscles aren't firing is that because we have not given them the input (eccentric) to activate? Especially during function related and non-contrived movement away from the gym!

I have seen various muscle firing tests, many lying down while being palpated, usually with the diagnosis that the muscles are not firing properly or in sequence. Well what do you expect?? If we ask a muscle to shorten without first eccentrically lengthening as we see in functional movement how can we expect it to 'fire' properly?

Also what would the 'firing' sequence be when lying down. Different movement patterns will have different muscle activation patterns based on joint angle. As the angles change so will muscle activation. If my glutes are not firing when I lie on my front then that makes sense to me. No eccentric activation has occurred, nor is it likely to as my ability to flex is blocked by the floor (according to classical anatomy). We also have to ask ourselves what movements activate (lengthen) the glutes. If we look at the oblique angle of the muscle it would lead me to believe that internal rotation and adduction would also play a huge role. If we look down the body at the sub talar joint (STJ) the similar direction/angle of the joint (42°) to the glutes action line means that the joint moves predominantly in the frontal and transverse planes (Eversion and abduction). Why then do we see the largest glute, the glute max, as a predominantly sagittal plane muscle? In fact the relationship between the two parts to me is obvious. The axis of the STJ reacts to ground reaction forces going up and in, inferior lateral to superior medial, the glute action line will run perpendicular to this running down and out (pointed out by my good friend Ola!). A perfect relationship to help eccentrically decelerate STJ motion before producing force. In fact as the great Gary Gray calls the STJ "The switch that turns on the engine (glute max)." So for glute activation do we need to be upright and moving? I would say yes! 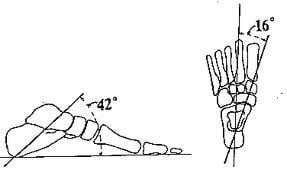 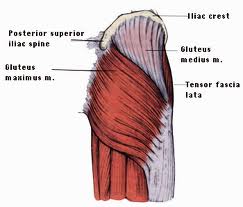 Here we can see the perpendicular relationship of the action line/striation of the glute from origin to insertion and the axis of the STJ.

How can someone tell the split second difference in activation between different muscles, especially through palpation, without the aid of expensive EMG equipment? What sequence are muscles meant to fire in the situation you are testing them? We need to know that first before we inform someone it is wrong or is not happening!

So lets put this a little bit into some context. A classical way to reduce knee valgus or abduction during gait is to fire the glute 'complex' sometimes specifically the glute med. This will create concentric force to abduct the hip to reduce the knee 'falling in'. This occurs in the front foot (pronation) phase of gait.

So if we want to create abduction then should we not first create adduction? During an energy sensitive, in terms of efficiency, activity such as walking creating an eccentric movement first would help generate elastic energy from both the passive and active muscular components.This means less metabolic energy expenditure. This eccentric activation also creates a subconscious mechanical trigger to produce concentric force to move our centre of mass. This means we can walk and talk and freeing our conscious mind to worry about what we are going to have for dinner.

Well this is what happens! But in reverse. When our foot hits the ground we go through an adduction moment at the hip. Don't just believe me, lets refer to a scientific study -
"The hip adducts in the absorption (front foot) phase because the ground reaction force falls medial to the hip and the hip abductor moment is less than the external adduction
moment due to gravitational and acceleration loads" ("Biomechanics of running, T Novacheck 1998). So the external forces outweigh the internal muscular forces. 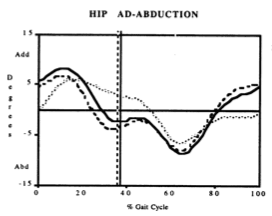 Many times an increase in 'gravitational and acceleration loads' can come from a foot that increases pronatory forces. The hip will never have a hope of producing the torque to overcome increased force if it cannot overcome the force in a normal functioning individual with normal pronatory forces occurring.

So we have to ask ourselves if non functional concentric activation or 'firing' into abduction without external forces present (when we are lying on our side or back) is going to help us produce stiffer muscles (resistance to lengthening) that can resist a function related eccentric adduction moment or even an increased adduction moment? Is this even the rationale used? Or are we trying to 'fire' individual muscles such as the glute med (even less chance of overcoming force) to overcome a force we cannot overcome and then blaming a muscle not working?

On an anecdotal note many people who display increased pronation and knee abduction/valgus who I functionally assess seem to lack adduction of the hip. It maybe that the hip muscles/capsule in response to increased force closes down motion. Capsular restrictions many times affect all motions/planes at the hip. Another strategy then maybe to increase the ability of the hip to adduct to help decelerate movement of the femur into adduction.  Just because the real bone motion of the femur is towards the mid-line this does not mean the relative hip joint motion is adduction.

Another rationale would be to address the increased force occurring at the foot. A rationale rarely used. That's why we see the single leg squat over the 2nd toe, hopefully to teach the body to resist a force greater than it can by 'firing a muscle' that would be in fact out of the functional sequence. From a functional perspective if we do not decrease force through the decelerative lengthening of adduction that the glute/hip will provide, the force coming up from the floor will just be transferred to another structure, possibly the lumbar spine.
This is my humble opinion on the complex subject of muscle 'firing' and its application. As usual more questions are posed than answers given. For more info check out www.facebook.com/corkinetic