Blog
You are here: Home1 / Blog2 / Uncategorized3 / The TvA. Does it matter and why are we obsessed with it?!

Whenever we run a Cor-Kinetic course for physio's and other health care professionals the same subject always comes up, the TvA and lower back pain (LBP). This inspired me to write a blog on the subject!

I feel a lot of health care professionals can struggle with a view that questions what they are taught as effective back pain strategy. If simply working the core or the TVA was an easy and effective strategy then chronic LBP would not exist. The truth is that most back pain goes away of its own accord without intervention. It can come back intermittently or transfer to somewhere else as the body finds other movement strategies to keep itself out of pain. It is the body's ability to compensate or modify its pain thresholds that tends to manage the situation in my humble opinion.

The focus of this blog will be more on what the TvA does or does not do rather than the timing issues that tend to dominate research and discussion. I am more worried about what the train does once it gets to the station rather than when it gets there! The difference between the onset of TvA contraction between symptomatic and asymptomatic individuals was around 20msc or about a fiftieth of a second in the Hodges study (1998). A minute difference.  With such a tiny delay would we be able to increase our conscious contraction to alter this timing issue, or would it be beyond our conscious control?

Another question is can we consciously activate single muscles? No muscular contraction happens in the body in isolation. Contractions happen by the brain innervating motor units across a spectrum of muscles that are involved in moving and stabilizing a joint. This innervation will change as joint angles, speed and effort level change. This would be a simplistic view that may get much more complex as we take a wider global view of muscle activation in the body.

During functional cyclic movement, conscious activation also does not occur. Our motor patterns are set or have evolved beyond the conscious. This allows us to worry about all the other problems in our life or what we are going to have for dinner. The movement of our bones due to forces acting on the body and our environment will create muscular reactions to control the rotation and translation of our bones. These reactions are generally to lengthen our muscles eccentrically to control this bone motion before we concentrically shorten them. This provides a subconscious trigger through the proprioceptive system to create muscular force. This is a much more efficient system than conscious activation. This process happens in all the muscles of the body, even in the most important the heart, which is certainly subconscious!

This then brings me to the question that my mentor Dr David Tiberio always asks about muscles "If it is not switching on, what switched it off?"

To answer this question we must understand more about its attachments and what they will do during functional movement. 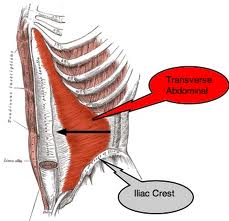 The TvA is attached to the ribs and the pelvis. This simply means it will be affected by the movement of the arms and legs, the main movers in the body. It also has a transverse fibre orientation meaning as it contracts the anterior and posterior attachments would get closer together rotating the trunk. In fact we have two sections of the TVA. Cresswell AG Et Al (1999) recorded “Reciprocal patterns of activity between the left and right sides of transverse abdominis” during trunk twisting movements. Consistent with one side eccentrically lengthening and the other concentrically shortening. Why then do we not see the TVA as a rotational muscle more as a muscle that tends to remain isometric?? In the excellent Hodges study (1998), the participants were asked to perform differing arm movements to evaluate the TvA. The movement that caused the most TvA reaction was abduction at the shoulder. This abduction moment would rotate the spine to the ipsilateral (same) side causing a propreoceptive reaction and TvA activation as a response to this spinal rotation. This indicates the rotational nature of TvA. In this case the research has been good, it may be our interpretation that is misguided when creating an exercise strategy.

So to activate (eccentric) the TvA we need the motion of the ribcage and pelvis, they are affected by the movement of the arms and legs. What above or below in the kinetic chain is not moving to cause adequate motion at the ribcage and pelvis for TvA activation which would be subconscious and movement driven in a functional context. A movement far removed from the Spine will still cause a proprioceptive reaction in the CNS.We know the foot has a huge impact on the motions at the hip so therefore must also cause a reaction at the lumbar spine and TvA! Do we look at the foot enough when it comes to LBP. That is another blog entirely!!

If correct joint motion does not occur then this proprioceptive signal to the TvA will also not occur and may reduce TvA activation. We also have to ask ourselves what we regard as TvA activation. Would this be eccentric or concentric? This is something that the EMG will not tell you. The assumption is always the muscle is shortening and this has influenced the exercise strategy for TvA "firing".

If the role of the TvA is to individually stabilise the spine does it have enough force to remain concentrically or isometrically contracted as the ribcage and pelvis dissociate? For the answer to that we must put the TvA into a functional context.

If we look at a pretty universal function such as gait and read a biomechanical study of the moments occurring we know that the pelvis drops forward into an anterior tilt. The ribcage does not flex as much so we can remain looking forward. This would create an extension moment at the lumbar spine. The pelvis rotates upwards in the frontal plane whilst the spine laterally flexes to the same side causing a lateral flexion moment at the lumbar spine. We get pelvic rotation to one side whilst we get trunk rotation to the opposite. This again will cause a rotational moment around the lumbar spine. If the TvA was successful in its activation would we get any of these force moments occurring or would we get no joint motion as the TvA locks down motion? How would this affect the motion above and below in the kinetic chain? Has the TvA got the force production capabilities to resist the motion of the bones? Would the body choose to only access one muscular resource in the face of a large task such as spinal stabilisation in a high force moment situation?

The whole concept of a rigid and neutral spine is also a little strange. Evolution would have created a design of the vertebrae that had less segments surely? A single bone that was not meant to articulate but instead remain in a fixed position. Instead we see the majority of the spines flexion and extension in the lumbar spine. Neutral may be a position we move through but definitely not one we stay in. In a gym context we may be able to attempt to stay in a contrived position but go out on the tennis court or even walk down the street and the joint motions occurring at the lumbar spine will be anything but neutral.

We must also look at the metabolic implications of remaining isometric or concentrically contracted for a prolonged period. This would happen during any movement as the TvA is seen as concentrically contracting to stabilise the spine, the longer we move the longer it would stay contracted in the traditional model . What would be the implications for intramuscular pressure and blood flow? How would the vital oxygen arrive and clearance of lactate occur? Movement eccentric to concentric provides a pumping mechanism that supplies the muscular system with the vital lifeblood that it needs. The functional process of eccentric before concentric movement provides not only subconscious information and energy but also the pump that helps the body survive metabolically.

The power of the TvA may actually be in the structure itself, the anatomy of the area. The most motion in the lumbar spine is the sagittal plane. The fibre orientation of the TvA is in the transverse plane. This means the fibre dissociation will be limited when a sagittal plane force is applied. This provides natural stiffness and stability that happens through a passive and subconscious reaction. This would be a highly efficient from an energy standpoint which is a huge driver of the operation of the body.  Couple this to a predominance of slow twitch fibres with a high collagen content and a small fibre length and again we get natural passive stiffness. If we add to this a neurologically controlled feed-forward element of stiffness through adaptable muscle spindle gain then we can have a powerful yet subconscious effect on the lumbar spine. Although this would not be in isolation of other muscular and fascial resources.

As always we have far more questions than answers I am afraid along with a heavy dose of opinion. Away from a clinical setting and under movement and resultant forces the TvA may have a different role to play and in these circumstances all muscles may behave differently to how we perceive there roles in a more static setting. If you would like to learn more about Cor-Kinetic education *click here*

Optimal range. More may not be better!

Throwing injuries-A case study in deceleration, the forgotten end of the throw part 1!

Simple side of biomechanics!

Throwing injuries-A case study in deceleration, the forgotten end of the throw...Stability and mobility. Best friends….
Scroll to top