Blog
You are here: Home1 / Blog2 / Uncategorized3 / Throwing injuries-A case study in deceleration, the forgotten end of the...

I had an interesting case this week involving a water polo player who was experiencing shoulder pain when throwing. This pain was only occurring however when he put maximal effort into the throw. Now I do not get to see many water polo players so this was a challenge. I decided to put aside the fact that ground reaction forces would be different as well as having two different resistances on the upper and lower parts of the body (air and water friction) as this would present even more challenges to the assessment! 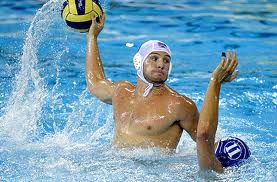 Something that interested me immediately was that it only occurred at maximal power as a tear or inflammation of the tissue would more likely hurt somewhere near to maximal power not just at maximal power. I felt like the pain was the body's way of reducing maximal force as it could not deal with it. As we are all starting to learn in the health care industry, pain is an interesting and ever-changing thing that is maybe not just created or perceived in the traditional way we have been taught.

First thing I did was to look at the movement as I was unfamiliar with it. To me it looked a lot like a baseball pitch! I also wanted to know at what phase of the throw the pain occurred during. This could be the pull back, the acceleration or the deceleration. Many times we look at the initial phase of a throw in the same way we tend to focus more on the back swing of a golf shot. Both functions also have a deceleration phase which can be neglected both in terms of skill and pain. If the body is unable to decelerate a movement then it may change its acceleration in anticipation of this. It may also limit how much we accelerate by creating a protective pain response. The peak force during a baseball pitch has been estimated at 27,000 inch pounds of torque. This is four times the force of a soccer kick!!

In this case the gentleman was a left-handed thrower meaning that he finished the throw with his left arm over his right leg. This would mean that the right leg would be vital for the deceleration of the force of the throw. A few studies have looked at segmental contributions during throwing by restricting segments during the throwing action and have discussed the huge contributions from the rest of the body in terms of force and kinetic energy required during both acceleration and deceleration phases. Most studies of throwing still focus predominantly on the shoulder as do most shoulder injury protocol from health care professionals. From what I can tell shoulder injuries have reached epidemic proportions in the world of baseball so maybe they should start looking away from the shoulder to a more global view of the body. Faced with so much force a clever organism such as the body would try to dissipate it over the whole system rather than just one segment. Maybe we should look at why that may not be occurring and use a more global approach.

Armed with this knowledge I first delved into the patients exercise history. Straight away there was a history of sciatic pain down the right leg. As a posterior structure the sciatic nerve in my humble opinion is often impacted by the tight posterior extensors. People who display sciatic problems can often get pain when going into flex hip position when reaching down. This could be because we have to get flexion mainly from the lumbar spine as the rest of the functional chain does not contribute. This set off alarm bells straight away.

Looking at the Gait was the next part of the assessment. I wanted to see how he moved in another function. As he stepped onto his right side I could sense that he was not flexing the right hip/leg well. A good indicator of this is the amount someone moves through the spine especially an increase in motion. This is because of ground reaction forces acting on the body. If the forces are not attenuated below then they have to be attenuated further up the kinetic chain. Our bodies do this through movement of bones and tissue so we can see exaggerated motions. This could be in the frontal or sagittal planes (kyphosis). In this case I saw an exaggerated lateral flexion to the right showing the increase in force further up the chain as the right leg hit the floor. This would be a bottom up force application but would also mean that forces could not be transferred top down to the lower body during a throw. I had a look in the frontal plane at the adduction of the hip (front leg motion during gait in frontal plane) and it was definitely limited. This would mean the force would be pushed upstairs.

So what would happen if I took the right leg out of the throw?? I had him perform a single leg throw at the same force that previously caused pain standing solely on the left leg. This caused no pain to the surprise of my client but pretty much made sense to me. I then had him perform exactly the same throw standing on the right which caused the pain to return.

This all pointed to the right leg as the culprit for the pain rather than the left shoulder. I also looked at the right foot and found that there was also a compensated rearfoot varus (inverted position of rear foot). This will create an increase in pronatory forces and a foot that contributes less to the deceleration of force. This will also increase force transference up the chain from the bottom up. During top down motion it maybe that the hip becomes rigid to stop the transference of force to structures that are inherently unbalanced and unstable such as a foot deformity. The body will create stability/rigidity in the face of instability. That's why we don't move well on a bosu!! Often I find in the face of increased forces the body chooses to proprioceptively close down hip motion to protect the hip structures both bottom up and top down driven.

In the next part we will look at the treatment!!

Its all about practice!!

It's all about assessment….

Is your movement giving you what you need?The TvA. Does it matter and why are we obsessed with it?!
Scroll to top