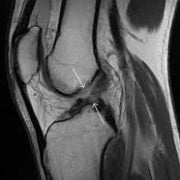 ACL injuries have recently been receiving a lot of attention. In part one of this two part article we will look at the kinematics and movements associated with ACL injury and how we can use this information to influence our rehabilitation and prevention programs from a functional movement perspective. In part two we will start to progress this information into some practical movement and exercise ideas.

Over the two parts we will look at 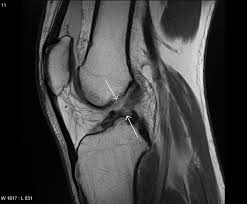 According to the NHS, in the UK there are around 30 ACL injuries per 100,000 people. ACL injuries account for about 40% of all sports injuries. (http://www.nhs.uk/conditions/repairtotendon/Pages/Introduction.aspx)

It has been estimated that in the US 175,000 ACL surgeries are performed annually at an estimated cost of $2 Billion (Gottlob et al 1999)

Between 60% and 70% of ACL injuries are non contact in nature (Boden 2001, Kobyashi 2010) Could these be injuries be more preventable?

Often it is difficult to determine the precise mechanism of an injury or pain. There maybe no specific event that can be pinpointed. Pain is often a multi factorial event that can be modulated by many factors and does not always have a consistent relationship with tissue state and pathology. (Moseley 2007)

With ACL injuries however this can often be a little clearer, with the injury accompanied by a specific traumatic event to a specific tissue.  This appears to be related to some  reasonably consistent mechanics according to the available research. Certain movements will place more mechanical tension on the ACL and therefore this information could be used decrease or increased the load to the relevant tissues during the rehabilitation process. Managing appropriate tissue loads is vital to the healing process. Similarly injury prevention would be focused around these specific movements also.

There may exist a gap between the information available about mechanisms of injury and sporting demands and return to play programs for the ACL. Especially when it comes to the dynamic and multi plane aspects involved with sport that are amplified at the elite level. This blog seeks to provide some rehabilitation ideas based on the functional demands of the sporting environment. Functional testing such as the hop and isokinetic strength testing are the most common functional tests for return to play (Abrams et al 2014). We still however see significant deficits at 6-9 months, when return to play will usually occur, between the injured and non injured leg (Abrams 2014) The hop, although more reflective of function than isokinetic strength, if dominated by sagittal plane motion may not reflect the multi plane demands of movements such as cutting. Cutting is a fundamental component of many sports where we see a prevalence of ACL injuries and is a movement associated with ACL injury.

Do these tests and associated rehabilitation programs reflect the true functionality required for return to play? Reinjury rates have been reported as high as 12% and return to play offers a significant risk of reinjury (Myklebust 2005)

There could to be two schools of thought with regards to the injury rehabilitation and prevention process. One could be to train to avoid the movements that have been implicated in ACL injury. Another could be to train to control the movement by using the specific movements and the related motor patterns and mechanics. This could be compared to immunotherapy where patients are given controlled and progressively increasing dosages in order for the body to produce the necessary mechanisms to build immunity, in this case through the neuromuscular system.

A key question if we are training to avoid a movement would be that with the high forces involved can we create a joint moment to resist a movement likely to be damaging to the ACL? Valgus movements of the knee are normal and it may severely limit sporting performance if we were not to able to go through the associated kinematics.  Our ability to control the rate and range of knee movement maybe the most important factor.

We will see later that strength may not be a key variable when we are trying to reduce peak kinematic ranges.

Using functional movement based approach we will use the available data to create a progressive program for rehabilitation and prevention.


It is important to first understand the kinematics that places the ACL under most stress.

One of the key findings from Marklof was the shallow knee flexion angles employed to test ACL strain.  We see this repeated in other research into movements related to mechanism of injury discussed in the next section. In the Kiapour research the knee angle was fixed at 25 degrees that may not reflect the dynamic nature of landing or the differences in ACL strain at different knee flexion angles shallower than 25 degrees. This research taken individually may not reflect the different forces during different movements but broadly supports the consensus available from multiple sources.

High knee abduction loads and increased dynamic valgus during a bilateral jumping task (Hewitt 2005) have been implicated as predictors of ACL injury. Although the knee abduction is a certainly a risk factor it may also be in combination with other loads as well. Aiming to reduce just one piece of the kinematic puzzle associated with ACL injury maybe less effective than a multi plane strategy across multiple movements.

The MCL is has been shown to be the major structure stopping medial knee space opening (Matsumoto 2001). This means a knee valgus moment on its own is unlikely to cause an ACL injury as ACL strain during a valgus moment with an intact MCL was minimal but significant after MCL rupture (Mazzocca 2003). Fayad (2008) showed that only 5 out of 84 contact and non-contact injuries were accompanied by a complete MCL rupture.

Key information from the research:

How does this guide us?

Video analysis and retrospective interviews of those sustaining ACL injuries are two methods employed to ascertain injury mechanism. Neither is without limitation but do show some common characteristics.

Injury mainly occurs from non-contact mechanisms such as plant and cut, landing from a jump, sudden deceleration when running and change of direction. These would be the most preventable from an injury prevention standpoint.

Olsen (2004) in his study of Handball players classified injury situations into two main groups. Plant and cut mechanism was the most common with 12 cases. Four being two-footed push off and 8 being one footed. All injuries occurred to the push off knee. The push off being for a change in direction, towards the medial side of the knee axis, in all but one of the cases. The knee being nearly straight, in valgus with internal or external rotation.

A single leg landing was the next most common with 4 cases. The foot was firmly planted firmly on the ground and foot externally rotated. 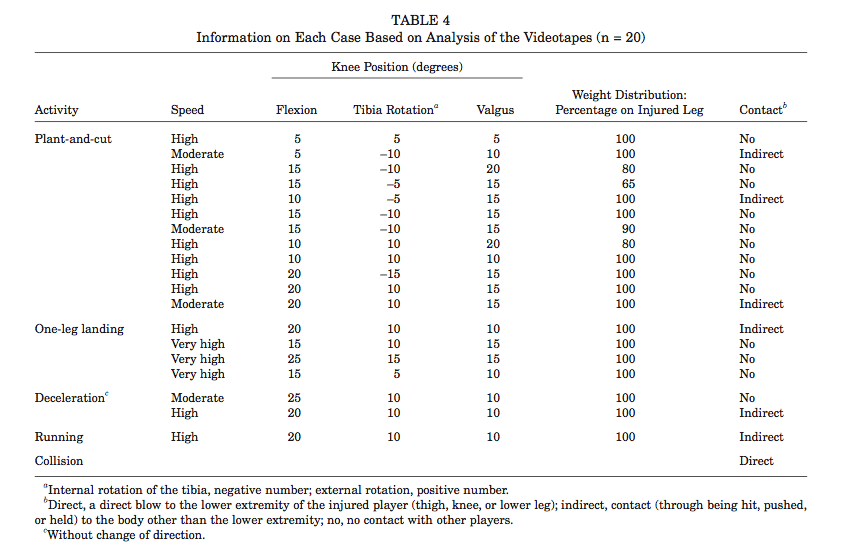 Kobayashi et al (2010) performed a twenty-year clinical research of 1,700 athletes in Japan. They found non-contact accounted for 60.8% of injuries with a knee in-toe out dynamic alignment in 51.9 % of cases. This reported dynamic alignment would likely be associated with abduction and externally rotation at the knee joint.

Boden (2000) found 72% of 100 ACL injuries were non-contact. The knee again was seen to be at near full extension. Mechanisms were sudden deceleration prior to a change of direction or landing motion with Valgus collapse of the knee.

Olsen also explored why the injury occurred even though the athlete may have performed this action many times. In many cases a perturbation was reported, as well as being pushed or held and having an unusually wide foot position. An ability of the motor system to deal with unexpected events is always a bonus and another variable we can factor into rehabilitation and prevention.

Here we see a reasonably consistent set of movement variables and positions that resulted in ACL injury. The point of having this data is that we must base our rehab and prevention strategies on the information we have available.

How does this guide us?

This is a short video using some of the strategies discussed on a multi plane single leg squat task.

In any dynamic sport we involve the use of the whole kinetic chain to decelerate and summate force. With many ACL injuries we see a large amount of motion occurring from the knee in all three planes of movement.

We must also explore the ability of the hip and foot on the ipsilateral side to provide adequate motion to reduce the need for movement and force to localized at the knee joint. During a cutting movement with the foot firmly planted, the change of direction can be initiated proximally on the planted leg driven by the opposite leg in opposite direction. This concurrent external rotation and abduction of the hip may reduce the dynamic valgus and relative external rotation at the knee by way of the femur.

Reduced ankle dorsi flexion and hip flexion could also reduce the amount of flexion the knee is able to go through leading to a shallow flexion angle associated with ACL injury.

Focusing on the skilled movement of the leg as a whole maybe a beneficial strategy to integrate the 3 components of the leg involved with planting and cutting and landing. The complex coordination and sequencing of multi joint and muscle actions is vital to the dissipation of the high forces that are required to cause the rupture of the ACL.

Here we see a number of points that can be taken from the research and our knowledge of the functional demands of sport to start to form specific rehabilitation and prevention programs. Research into more function related return to play tests that reflect the specific  movement demands of sport are needed, especially those that can be implemented without expensive clinical equipment.

In part two we will start to look at implementing the information we have gathered into a progressive rehabilitation program and the associated variables that can be manipulated.

Some key take home points from our 'Functional therapuetic movement'...