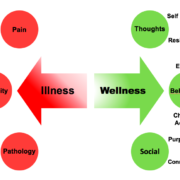 The biopsychosocial (BPS) model is one of those things you probably feel like you should be doing but maybe don’t know exactly how or you don’t have the skills? There does seem to be a fair amount of uncertainty and a bit of anxiety associated with the BPS model HERE and even the papers that discuss it rarely seem to actually define it!

This take on the Dan Ariely "big data" quote sums it up quite nicely (kudos to the author!)

Biopsychosocial management of back pain

Everybody talks about it;

Nobody really knows how to do it;

Everyone thinks everyone is doing it;

So everybody claims to be doing it.

But maybe we don’t need to FULLY define or understand the BPS to start to implement it in some way. The first thing we need to do is actually know MORE about it. I was told recently that the BPS model is “old and we should move on” in a twitter discussion. A little bit further into the discussion it turned out the other party had not read much about it, I think this happens a lot. We all seem to have our own interpretations around what BPS is and is not, so this is my attempt!

There seem to be two main perspectives that are summed up in these quite differing quotes:

“The Biopsychosocial model was first conceptualised by George Engel in 1977, suggesting that to understand a person's medical condition it is not simply the biological factors to consider, but also the psychological and social factors” Physiopedia

The first is focused more on the person we are treating and the second more focused on the condition or problem, so no wonder we have a bunch of confusion and NEITHER really give much guidance about what to do next.

One of the perspectives that I feel gets lost in some views of the BPS model is the focus on the ‘humanisation’ of healthcare which is a feature of Engel's writing. To understand the biopsychosocial model we also have to understand why we needed it in the first place and this was to come away from the reduction of healthcare to pathology and numbers that was the biomedical model.

Isn’t it fascinating we now quantify the success of a BPS approach simply by an outcome measure!?

Philosophy of care and person focus

Maybe this is the real spirit of the BPS? A ‘philosophy of care’ and a person focus.

The cool thing is it does not require extensive training to implement, instead it simply requires us to appreciate there is another person who is more than a disc or a tendon or whatever issue they have. They also will have a history and experiences that shape their emotions, perspectives and ultimately behaviours.

This for me is summed up nicely in this quote.

This quote from Joanne Bourke also sums up how we can focus more on the pain than the person who has it.

‘Pain’, rather than a person-in-pain, is given agency. A pain-event always belongs to the individual’s life; it is a part of her life story”

When it comes to the human side of the BPS perhaps we can get stuck on the idea that everything we do has to result in a better outcome e.g. a change in pain. So this interaction is measured and judged via change in pain, empathy is measured via change in pain, you get the idea. This is exactly the positivist/empirical perspective Engel seemed to be arguing against, reducing everything to a hyperfocus on the problem and then measuring its change! We should be being aware of how we interact NOT just to get a better outcome measure but also because its the RIGHT THING TO DO!

Evidence based medicine is important but not at the expense of a person. We really need to zoom out to the whole often rather than separating into smaller parts and descending DOWN Engel's hierarchy of systems.

The aspect of the BPS model that is probably most important is our own self reflection on how we think, act and interact but I have rarely seen this discussed. Just reflecting on how we communicate or care for the other party or conduct ourselves is enormously valuable.

The thing is that if we want the BPS to be an effective treatment tool then it probably requires the human aspect that is being discussed here. Many psychosocial factors that relate to pain require changes in behaviour. These changes also require trust and belief in what we are saying and this can be tough when it is contrary to all the other concepts and ideas around pain that people get exposed to.

There are a number of points that we can appreciate to implement a more person focused version of the BPS model that are NOT directly treatment focused but might have an effect on the process.

None of these things are treatments but do help us understand the person and their levels of engagement, optimism and outlook for the future. The appreciation of these points also does not require a huge amount of training to impliment.

A more traditional diagnostic and treatment focused use of the BPS seems to be the most popular way it is interpreted and implemented and perhaps this can cause a bunch of the issues for both clinicians and patients. To treat thing’s specifically the thought is we have to kind of know what the problem IS first and we can get hyper focused on finding the CAUSE of the problem, but now we have way more potential problems across lots more areas to confuse us! Sticking to traditional pathologies can be hard enough and this is without having to be an expert in other fields too!

I think there is a case that we could see this as a biomedical application of the BPS as we could treat multiple BPS 'factors' WITHOUT actually treating the person in the spirit of the BPS and with a focus on person-centred care. A real aim would be to successfully implement a person AND pain focused model.  Many of the factors we need to identify to implement a pain focused model actually need the person-centred model to make them work anyway. Without a good therapeutic relationship and trust and rapport how do we get people to tell us the information we need? How do we help implement the behaviour changes that are often required? The simple answer is we don’t.

Maybe a better way to see this all would be factors/behaviours that TRIGGER pain not always viewing it through a causation lens. Many things might trigger, exacerbate or modulate a painful state. Is this semantics? Potentially, but maybe less focus on CAUSE might take the pressure off clinicians to pin point a cause and does not feed people’s desire to find the one thing that they need to fix their pain. We might swap disc/nerve/alignment for stress/sleep/job and a triggers perspective may help people make sense of their pain situation rather than search for the cure or fix in the same way that can often prove frustrating and demoralising.

As we can see HERE 9, yes 9 psychological factors were identified as being involved with rotator cuff tendinopathy pain, function and quality of life. No wonder a BPS find and fix it model is seriously daunting for most clinicians.

A good analogy might be that of a cut that is grumbling away in the background. Sometimes I am unaware of it, others it is giving a slight twinge. But get something in it that irritates it and it’s a whole other story. This added element has interacted with the cut and triggered a response. Without the cut it might not have done so perhaps on its own we might not see it as a casual element. There is a sometimes a danger we simply swap biomechanical impairments for psychosocial ones.

The interaction of BPS factors is inherently messy. Humans are a complex web of interrelating systems that display non linear responses between things acting on the system and the responses it makes. This can mean we could have huge changes in a variable such as stress but only minor changes in how it affects a target variable such as pain. We also might target one variable, that may not change significantly, but another mediating variable changes and this changes a target variable. This maybe different to the sometimes linear approaches that we can see in research and clinical models that involve a primary outcome measure and intervention.

If we approach the BPS model as a simple view of linear causation and impairment fixing this kind of goes straight back to a biomedical perspective.

There are positives and negatives to this messy non linearity of the BPS with treatment. Positive in that treatments can have wide ranging effects across many variables and the negative that they also might not! Exercise can have implications for general health, mental health and pain through a whole bunch of different mediating variables. One way to start to approach the BPS model is not in trying to fix an impairment but improve aspects we know are beneficial and may provide an overall effect. This would fit with Antonoskys salutogenic model of focusing on wellness rather than illness. 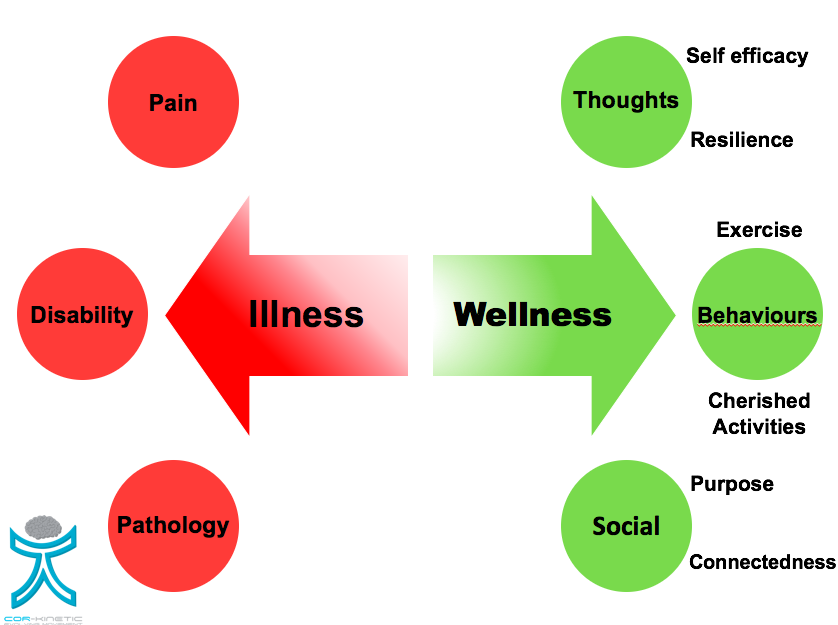 Perhaps an issue is we now see it as “just do some exercise” and the person will be ok.

Exercise ‘works’ is a common perspective but this really does not tell the story of the data. It is not so much if it ‘works’ at a population level but how much effect does it have for this person in front of me. For all this potential to have wide ranging effects we still don’t see dramatic benefits in the research and often clinically too on the outcome measure of pain. Maybe this is because we expect exercise to automatically transfer to whatever the issues are? Effects on strength, sleep, mental health and ultimately pain are all potential effects/mediators that we see in the research base but we are not GUARANTEED these effects. This paper found HERE found that strength and power scores did not make people feel automatically ready to return to play. Although physical conditioning MIGHT make people FEEL mentally stronger it is not an automatic and linear relationship.

We probably need a bit of both perspectives to make things work effectively.

If we put this into a context, firstly we need to consider the effects we might want from exercise based on finding out more about the person we are working with. Do we want to improve health? Wellbeing? Function? Exposure? We might have to set up exercise in some different ways to achieve these different aims. Secondly our deeper knowledge of this person and their journey might help use frame, explain and implement the exercise in some different ways that could have a better potential to have the desired effect.

If a BPS approach just ends up in do some exercise because it CAN have wide ranging effects I think we have lost sight of what the BPS just might be!

Does exercise ‘WORK’ for pain? – Scrutinising the question!

How OFTEN should my patient do their exercises?
Scroll to top