Blog
You are here: Home1 / Blog2 / Uncategorized3 / Power of the capsule!

At Cor-Kinetic we appreciate the power of the hip capsule and specifically the capsule ligaments. How to stimulate the capsule forms a component part of what we teach both academically and also in terms of technique.

We find that the powerful effect that capsule stimulation has on the muscles surrounding the hip-joint means that it is an area of the body under recognized when looking to create motion and stability around the hip and subsequently the body as a whole. 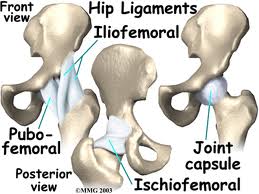 The three extrinsic capsule ligaments are arranged in a helical structure. This means that each ligament may respond to motion in any of the three planes of movement. The illiofemoral ligament is the largest and strongest. In fact it is the strongest ligament in the human body!

Ligaments are highly proprioceptive. This means when placed under tensile forces they send lots of information back to the CNS (central nervous system) and also surrounding musculature. If we get into a scenario where the hip muscles restrict motion around the joint then the capsule stops becoming stimulated. This is a bit of a catch 22 because if the capsule stops getting stimulated then it will not in turn play its role in stimulating the muscles surrounding the hip. This leads to a 'locking down' of motion in this area. As an area of huge mobility and freedom in the body (as a ball and socket joint allows) it can then impact on areas such as the lumbar spine, sacroiliac joints and general lower back area that rely on the motion and force dissipation of the hip and associated muscles for correct sequencing of movement and healthy operation.

Solomonow (2003) has documented much of the research into the proprioceptive ability of ligaments. Multiple anatomical studies have shown the presence of Pancinian, Golgi and Ruffini mechanoreceptors within ligaments. This means that through stimulation or lack of stimulation the capsule ligaments can create reflex activation or inhibition of the associated musculature. As far back as 1900 (Payre) it has been suggested that a reflex arc exists between muscles that may directly or indirectly modify the load imposed on a ligament. In this way the body can create a synergistic activity of ligaments and muscles for joint stability/mobility. The indirect nature of this reflex arc also shows the functional inter-connectedness of the body that we often miss with a joint-by-joint isolation approach.

This reflex arc has not just been noted in the hip. The stimulation of the medial collateral ligament of the ankle results in activation of the intrinsic muscles of the foot (Solomonow 2002). This again shows the power of the functional chain as many of these muscles do not cross the ankle joint! As we already know, during the pronation cycle rotation around the STJ (subtalar joint) is accompanied by rotation at the MTJ (midtarsal joint). This motion at the MTJ will also help decelerate lower limb motion preventing excessive motions at the knee and hip.

Traditional lengthening of muscles may not be the answer to create more motion at the joint to create more stimulation of the capsule. As muscles get towards end range they become stiffer (more resistant to lengthening), similar to what would happen when we stretch an elastic band. This would mean that the stress (force divided by area) applied would not result in strain deformation of the tissue or more simply put lengthening. This may mean that the capsule ligaments, which would be stimulated more towards the anatomical end range, may get reduced input. Both muscles held towards end range and muscles held shortened could display increased stiffness. Gadjosik (2002, 2003, 2005) has performed research into stretching and increased muscular stiffness.

Our methodology, especially around the hip, to create more capsule stimulation involves creating a passive shortening of the muscle in the transverse plane. At Cor-Kinetic we believe the transverse plane is responsible for a lot of the intrinsic stability in the body. Much like the ropes of a ship's mast, when we rotate or 'wind' a longitudinal oriented structure/muscle (also longitudinal orientation of the individual fibres), we create a passive tension. This tension is created quickly in a plane (such as the transverse in a longitudinal muscle) that lacks much range. This range would be much larger and therefore more movement before a stiff response if deformed longitudinally rather than rotationally. This would mean the stiffness/tension and resultant stability on offer would take longer to access.

To avoid this lengthening and resultant stiffness we instead 'unwind' the transverse plane by externally rotating. As we know from our anatomy lessons there are many more external rotators around the hip than internal rotators. We tend to rely on gravity for internal rotation during functional movement!

So our three golden rules of capsule stimulation at Cor-Kinetic are to shorten the transverse plane to reduce stiffness, create stability to reduce stiffness and preposition further towards end range. By changing body position and drivers of movement we can emphasis motion in the individual ischiofemoral, iliofemoral and pubofemoral ligaments. This should result in more stimulation of the highly proprioceptive capsule ligaments for reflexive stimulation of the associated musculature.

Stimulation of the capsule however is only one part of the story. Following this muscular activation 3D mobility must then be restored to the joint. This mobility must then be integrated into our movement. To much mobility maybe shut down by the body as it could be beyond the perceived range of the proprioceptive system. By introducing dynamic and integrated movement we can teach the body to understand this motion and create stability and strength in its new-found range and therefore integrate this motion into its everyday movement patterning.

This maybe why manual therapy techniques can be short-lived as we do not teach the body to stabilize the new-found joint mobility and mobility is perceived as instability. This is why mobility must be integrated into actual movement to create stability. Gary Gray has coined the phrase "mostability" to describe this process.

We teach a 3 stage 3 dimensional mobility/stability process on our two-day courses along with assessment techniques to determine which areas need to be focused on!

For more information on our courses please click this link Cor-Kinetic education.

As always this is our take on complex subjects and merely opinion back up with a smattering of research.

The curse of the short leg
Does clinical testing tell us much about functional performance? The Thomas test.
Using your mass!!!
Is your movement giving you what you need?
Its all about practice!!
Strength

Simple side of biomechanics!Is your movement giving you what you need?
Scroll to top