Blog
You are here: Home1 / Blog2 / Uncategorized3 / The Hamstrings!

The hamstrings are one of the most misunderstood muscles in the body and the explanation of them shortening when we bend the knee or lengthening when we straighten the knee is a huge simplification. To also view them simply as a sagittal plane beast does a disservice to the power that they hold in other planes of movement. 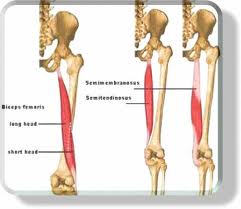 The first question is why are there three and why do they attach in different places?  The attachment of the biceps femoris on the lateral fibula straight away gives us control in the transverse plane. As the lower leg goes into internal rotation the hamstring is able to eccentrically control this motion.  This is similar to the gluteal attachment on the femur that allows it to control hip internal rotation. If we look at the universal function of gait and how much of the gait cycle is spent in internal rotation, due to ground reaction and gravity, it becomes easy to understand why.

The semimembranosus and semitendinosus are on the medial side of the femur attaching into the pes anserinus and onto the medial tibia. From this position they will have much more control of external rotation of the lower limb, either femur on tibia or tibia on femur. If we look at the pathomechanics of ACL injuries for example, the ability to control real femoral internal rotation, thus creating relative external rotation at the knee, is hugely important. Add to this the eccentric control that these muscles will exert on valgusing of the knee, especially with its close proximity to the MCL, we can see the multi plane importance of having these two distinct portions of the hamstrings. In fact should we even lump them together as a single entity??

The might Gary Gray described them as the like the reins of a horse which is a pretty accurate description.  This multi dimensional ability though is rarely noted.

The fibre arrangement remains fairly longitudinal in the sagittal plane. This gives the unique ability to control the range of movement through the other planes. Reduced ability for the fibres to move and lengthen in directions away from the fibre arrangement gives it an inherent stiffness to control motion.  A function related example of this would be how the hamstrings can help control foot pronation through slowing down tibial motion in the frontal and transverse planes at the proximal end.

The fact that the pelvis and the tibia/fibula are both connected to the hamstrings mean that the hamstrings can lengthen when the knee is bent and shorten when the knee is straight. This is all dependent on which section is rotating faster, something that is key to a bi-articular muscle. This means that if the tibia is rotating forward faster than the pelvis then the hamstrings will lengthen. We see this in the front foot phase of gait. The tibia’s distal end is rotating posterior while the superior portion of the pelvis rotates anterior. The tibia closest to the ground has to deal with more force so is rotating quicker creating knee flexion but lengthening of the hamstrings. If the pelvis rotated faster we would spend a lot of time looking at the floor!!! Add into this the anterior translation  of the femur due to gravity and connection to the tibia and we also get a lengthening force on the hamstrings at both the distal and proximal ends.

Equally during the up phase of a squat if the pelvis is rotating posterior faster than the anterior rotation of the distal section of the tibia then we will get shortening of the hamstrings, even though the knee is extending!

The two attachments of the hamstring can be important for understanding hamstring injury.  Many times we see hamstring injuries as lower limb dominant. However a top down drive e.g. pelvis driven, can make a huge impact. If the hamstrings are already under a large amount of tension as we may see during swing phase (large hip flexion of swinging leg) of sprinting. Then any additional tension caused from movement of the head affecting the pelvis may be too much for the hamstrings to handle.  This could be more sagittal plane tension or rotational tension from looking side to side.

In the video clip below we see Fernando Torres as he is sprinting for the ball.

He is looking behind him.  This would create some posterior rotation at the pelvis. As we drive the leg (femur) up into hip flexion this posterior rotation would reduce force created through additional eccentric tension on the hamstring that is generated from the anterior rotation of the tibia of the swinging leg. The problem comes when the ball drops and his head comes forward creating more anterior rotation of the pelvis. Now the hamstrings are being lengthened in opposite directions from both attachments. Under extreme force such as sprinting this can cause the hamstring to close down to resist this extreme force. The tissue confused from a proprioceptive standpoint and unable to lengthen will be at far greater risk of being damaged.

So why is it important to know all this about the hamstring?? Well it helps us create an authentic strategy with which to treat and train the hamstring. If the hip or ankle lacks internal rotation and therefore does not allow the hamstrings to lengthen in the transverse plane, then by understanding this need for multi-plane flexibility, created in different ways, we can factor this into our programs or techniques we use.

Fascia
Can functional movement be too much?
Biomechanics BS. Can you 'predict' injury or pain?
Stability and mobility. Best friends….
Knee pain-Patellofemoral. A functional approach.
Optimal range. More may not be better!