Blog
You are here: Home1 / Blog2 / Uncategorized3 / Achilles tendon pain. Are you looking at the right foot??

Things have been really busy with Cor-kinetic recently and I have not had a lot of time to blog. This post stems from a case I have been dealing with recently and I wanted to give an idea of our thought process at Cor-kinetic and how the symptom and cause of a problem are not always one and the same.

The patient in this case has been having Achilles problems on the left side and also lateral foot pain on the same foot. Interestingly the pain reduced the quicker he ran but more about that later.

The first thing I did was to have a look off weight-bearing at the feet, and started with the symptomatic foot. I wanted to get a sense of its movement capabilities and the type of foot I was dealing with. Visually much like the right foot I could see it was high arched and also had an equinous forefoot (a plantar flexed position of the forefoot). Another tell-tale sign is the externally rotated knees to feet that are more cavus than planus. The feet definitely flagged up straight away as a problem to me.

This was fairly apparent just in barefoot standing. I also like to get a sense of the movement in the foot and whether it is rigid or hyper mobile so I got him on the table and gave it a little wiggle to see what was there. It was definitely more on the rigid side! I like to go beyond that though and I wanted to see what it could do specifically in terms of pronation and supination. To create pronation I evert the calcaneus in the frontal plane and then drive the Talus into adduction creating STJ (subtalar joint) abduction in the transverse plane. I am less worried about the dorsi flexion component of pronation as we need less during pronation than supination. I really wanted to see if it would go as lack of pronation can be a cause of Achilles pain especially with a foot locked in supination (high arch). The foot although on the rigid side seemed to go into pronation pretty well. So I also had a look at supination. For this I put the foot in a dorsi flexed position as the demand for dorsi flexion during supination is pretty high and then externally rotate the tibia/talus while getting the calcaneus into an inverted position and the arch up. Again it moved pretty well so I was starting to think something else was causing the problem. As I said before a thought process at Cor-Kinetic is injury source and symptom can be far removed from each other in the human body! 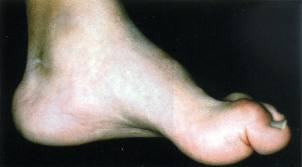 Lets check the right foot then. This felt like a much worse foot, more rigid and much less dorsi flexion. The foot wanted to sneak back into pronation when more dorsi flexion demand was placed on it. Equinous feet have used up a lot of the available dorsi flexion just being flat on the ground, so when the tibial angle increases during supination they like to use the dorsi flexion resources available that unlocking the foot or pronating allows access to. This leads to a late in the sequence back foot pronation and often a weight shift to the opposite side. The Hallux was also pretty rigid and limited in dorsi flexion, again a vital component part of effective supination. This set off alarm bells but I still wanted to go through the rest of the assessment.
I also wanted to see what he could do when performing weight-bearing pronation/supination. So I stood the gentleman up and got him to use the opposite leg/foot to drive the foot into pronation and supination. The left was able to go through effective pronation and supination. This led me start believing that the left was not the problem. The right however was struggling to supinate and dropping back into a pronated position when the dorsi flexion/tibial angle demand increased.

Next I wanted to see what happened when he walked. Again the right foot pronated very late in the gait cycle. Now i had a pretty good clue to what was going on. As the right foot was failing to supinate it was stopping the pelvis from rotating to the right. The right foot back foot pronating was internally rotating the right tibia when it should be supinating and tibia externally rotating. This was stopping the femur and pelvis from rotating right as the bottom up drive was stronger than the top down, and was in fact creating a lateral frontal plane weight shift to the left side of the foot. This would definitely cause the pressure on the outside of the left foot and subsequent pain. The holding back of the pelvis from rotating would stop the femur and tibia reacting to the foot pronating. The pronation problem not being caused from a lack of STJ motion bottom up but a reduction in the internal rotation of the bones TOP down by the lack of chain reaction from the back foot. Any part of the chain can cause a problem when the feet are coupled during motion as in gait.
Now this explains why the quicker he ran the better it got. The faster we go the more time we spend on a single leg and the less coupled our foot motions become. The right foot no longer affects the left which is able to go through an adequate range of motion to stay pain-free.

I got him to stand left foot forward and drive a lunge with the knee (which should rotate the pelvis right) and low and behold the shift to the left was apparent with no pronation of the left foot or right pelvic rotation occurring. When I helped the foot on the right to supinate from this functionally authentic position it enabled the left to pronate and go through a pain free range of motion. They key to treatment in this case is to help the right supinate to alleviate the pain on the left and that formed the major part of my homework for the patient.
The moral of the story being that many times we can treat the symptom but do not get a result. The key is to be non symptomatic in our assessment and look for the big problem. We need to test what the feet are capable of individually and when coupled. Also what they are capable of when coupled in a functional activity such as gait.
As always this is an expression of our thought process at Cor-Kinetic and an example of what may be happening!

The brain, movement and pain! Part two.
Golf: Hip Overpronation!
The curse of the short leg
What does the word functional mean and does it matter??
Is your movement giving you what you need?
What are we training for??

Stability and mobility. Best friends….Back pain during running. Have you looked at your big toe?
Scroll to top